We know how resilient Canterbury people are but we also know how hard it is to keep picking yourself up and pushing forward, so our thoughts are with our Southern family as they cope with the recent deluge, a torrid end to autumn for the region.

Our whakataukī references Matariki, the rising of the Pleiades star constellation, which this year begins on June 19, almost at the midwinter solstice on June 21. Matariki was a time when store houses (pātaka kai) were filled with food, and the land was at its most unproductive. However, it was also a time for bountiful catches of fish and the snaring of kererū (wood pigeon), which were preserved in fat. Traditionally, people gathered together during Matariki to remember those who came before and to plan for a new year.

Our good friends at The Incubator have worked with the Matariki Tauranga Moana committee and have a wide-ranging programme of events starting on June 11. See more here.

We would like to officially welcome Puhirake Ihaka (Ngāti Tapu of Ngāiterangi) as a member of the Tauranga Arts Festival Trust Board, and introduce him to you. Puhirake is chair of the Ōtamataha Trust and on the board of The Elms Foundation, two organisations that are custodians of one of our most historic sites, The Elms mission house on Te Papa peninsula. He is also a member of the Pukehinahina Charitable Trust Board and the board of Ngāiterangi Iwi.
Puhirake, who was born and raised in Auckland, jokes that he’s ‘just another friendly Aucklander’, but his family roots are firmly in Tauranga Moana and he moved here in 1995 for that reason. He’s passionately interested in history and, later in life he says, is acquiring an interest in the arts, both mainstream and Māori. Puhirake is married, with three children and nine grandchildren, and lives in Matapihi. Kia ora Puhirake.

If you haven’t marked your calendars yet, please remember that we’re launching our programme on Thursday, August 5 at Baycourt Community & Arts Centre. Tickets will be on sale at the box office immediately after the big reveal. The only thing we can say right now is, prepare to be wowed!

Our very best wishes for a relaxing Queen’s Birthday weekend,
Your Festival Team 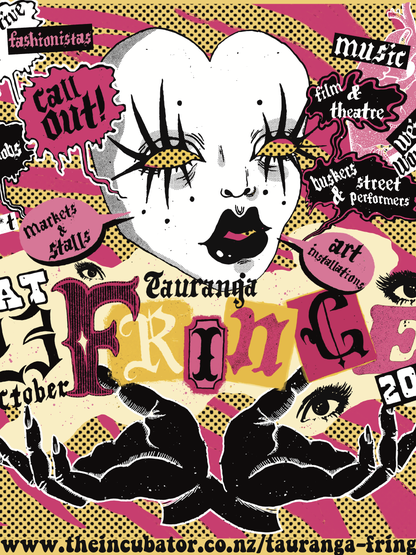 The X Space Has Become the Laughing Place

Writing Workshops for Everyone

Online Museum Made To Measure